Stephen Ackles is a Norwegian singer working in the tradition of Elvis Presley, Carl Perkins, Jerry Lee Lewis and other Sun Studios recording artists of the 1950's. His brand new single "Melancholy Christmas" differs from what he usually sings in several ways, as it's pretty much a rock ballad with more of a 70's feel, a Christmas song to boot, and it's also far more sombre and moody than the kind of stuff that he's famous for doing. It's a wonderful song, and the video is a bit surprising, depiciting as it does some of the less fortunate Romani people who are traveling around Europe begging for spare change to make a living. It's not the kind of video you'd expect from Ackles or any other Norwegian performer, but as you see him walking the streets of Oslo watching these people it's cause for a bit of pondering about life in general. But first and foremost it's a very good song and maybe a future Christmas classic. Who knows? 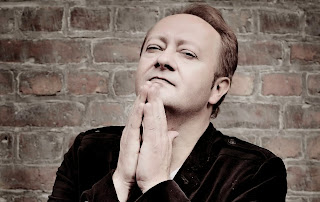