Terence Trent D'Arby, or Sananda Francesco Maitreya as he's started calling himself, released his debut album Introducing The Hardline According To Terence Trent D'Arby in 1987, with the kind of strut and swagger and unabashed confidence that we have to turn to the Gallagher brothers to find the equal to. His mouth was bigger than his talent or at least his ability to deliver as his three follow-up albums haven't in any way turned out to be either bestselling, crowdpleasing or joyable in any way. The debut album was very good however, and one of the best songs was "Sign Your Name". It still sounds great as you'll hear if you follow the link below. 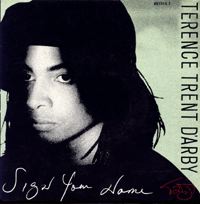