Four years on from her second album It's Not Me, It's You, and Lily Allen is finally back with new music. "Hard Out Here" is the first track to be released from her forthcoming 2014 album, and she is as tongue-in-cheek as ever in a song and music video that drips with sarcasm and disdain for the way modern pop music seems to objectify women. It starts with Allen lying on an operating table, then a music video with a lot of "booty" comes on in the background, before Allen hops off the table and enters the video. Also, there's a shot of some letters spelling the words "Lily Allen has a baggy pussy", referencing a certain Robin Thicke video. There is of course a fine line that she threads here as long as the actual song itself is of pretty much the same autotuned kind that Miley Cyrus or Rihanna could have performed - apart from the lyrics, that is. This is the kind of song that will probably become sort of an ironic hit, so who said irony died with the 90's? 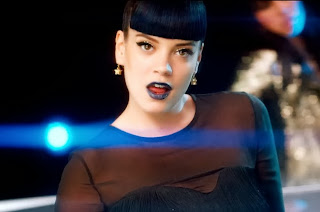