For me, Talking Heads eclipsed on the 1980 album Remain In Light. The songs - "Once In A Lifetime", "The Listening Wind", "Crosseyed And Painless" and more - were truly exciting, mindblowingly produced by Brian Eno, and the band was augmented by people such as Adrien Belew, Nona Hendryx and Jon Hassell, turning the record into a musicians' feast. But it was also David Byrne's vocal delivery that made the album stand out. He had never been as good as here, and the rhytmic experiments that were pretty much started on the predecessor Fear Of Music the year before blossomed in full on Remain In Light. Now, a lot can be said for 1984 live album and film Stop Making Sense. It's among my favourite live albums of all time, and it features a fantastic version of "Crosseyed And Painless". The very best version however can be found on the 1981 live album The Name Of This Band Is Talking Heads. I couldn't find that on YouTube (but check it out elsewhere), so I put up the studio version with its accompanying music video instead. It never became a hit, but in my ears the Afro-funk sound of "Crosseyed And Painless" is the sound of a band who could do no better. This is a true peak performance. 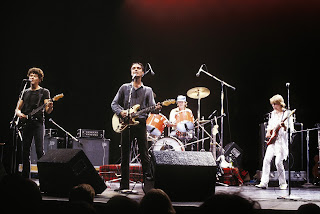