New year's is still a long way off, but for some reason I wanted to hear U2's classic 1983 single "New Year's Day", the first single off War, the album that lifted them up to some kind of semi-superstardom if there is such a thing. The real deal came four years later of course, with the release of The Joshua Tree. But to me, "New Year's Day" is the real deal, maybe my all-time favourite U2 song, perfect in every way. The video is pretty cool too. 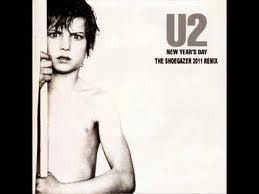