Pop genius, that's what Kirsty MacColl was. A brilliant songwriter with wry, funny lyrics, in every song of hers there was something just a little off, that set her apart from anyone else. She is sorely missed after her pointless death in December 2000, but her records and her songs live on. "Can't Stop Killing You" is a quirky little pop song of the kind she was so good at, a single and co-write with Johnny Marr, that featured on her 1993 album Titanic Days. 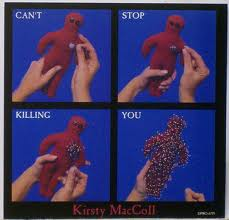