One of the least likely hit singles ever, Japan's stunningly beautiful but introvert "Ghosts" off their last studio album, 1981's Tin Drum, is as good, as strange, and as intoxicating as ever. But hearing it in 2013 does not make it easier to comprehend how it could become a number five hit on the UK singles chart in the spring of 1982. It must have a lot to do with singer David Sylvian's pop star looks and his astonishing voice, but the song is a strange beast indeed. 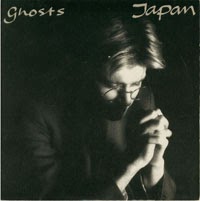