Indie before there was anything called indie, London band The Monochrome Set were among the most important post-punk bands of the "whimsier" kind, i.e. ones that have influenced modern bands as diverse as The Shins and Franz Ferdinand to name two. "Goodbye Joe" from their 1980 debut album Strange Boutique is one of their quieter songs, a ballad just for electric guitar and voice, the latter belonging to Indian-born lead singer Bid (real name Ganesh Seshadri). The song was also covered by soon to become one half of Everything But The Girl, Tracey Thorn, early in her career, when both acts were signed to the famous indie label Cherry Red. 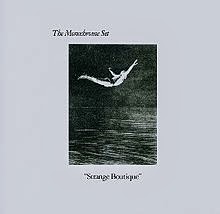