This is such a great song. Canadian rapper Drake's recent hit "Hold On' We're Going Home" just feels immensely good. It's a perfect pop song that has been rewarded with a very strange music video in which Drake plays a drug kingpin who has to rescue his girlfriend from a rival gang who's kidnapped her in 1985 Miami. That's the kind of thing you do when you have a lot of money to spend, I guess. It's silly, but well-made, but it's the song itself that is the thing here. Gunshots in the video is distracting and totally over the top. 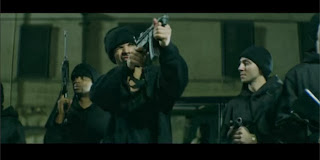