Neonato is a new instrumental band featuring four veteran musicians from the town of Arendal in the south of Norway. The members' previous experience is varied to say the least. Keyboardist Thomas Robsahm is a successful filmmaker, producer and writer as well as one half of the 80's goth duo White Lord Jesus who briefly returned in the mid-00's. Tom Rudi Torjussen has worked as a session musician for the past 20 years with people as diverse as Elvira Nikolaisen, Niko Valkeapää and Aggie Frost as well as being a part-time member of the band Jim Stärk. Guitarist Baard Torstensen is famous for being in the Norwegian/Swedish metal band Clawfinger, and Neonato's last member, bassist Geir Emanuelsen, has played with several different outfits, ranging from Go-Go Gorilla to The Beat Tornados.

Hopefully Neonato will release their debut album in early 2014, featuring a string of atmospheric instrumental tracks of a decidedly cinematic nature. The song "Neonato" is the first taste and it features its own film, as will be the case with all the songs on the forthcoming album, directed by Thomas Robsahm whose previous experience as film director includes the feature films Svarte pantere (Rebels With A Cause) and Folk flest bor i Kina (Most people live in China). Robsahm jokingly says that The The (Matt Johnson) made films for each track on the 1986 masterpiece Infected so he thinks Neonato should do the same. The "Neonato" film at least looks pretty good, satirizing modern consumerist living in a rich country like Norway, so there's hope for the rest as well.

Exciting stuff and some seriously hypnotic music that sounds like a cross between Brian Eno and David Byrne's groundbreaking 1981 album My Life In The Bush Of Ghosts and the Irish post-rock band God Is An Astronaut. Check this out! 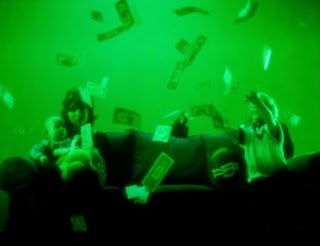