Lily Allen - Somewhere Only We Know

Christmas starts here! Lily Allen who only yesterday released her comeback single "Hard Out Here" has also recorded a version of Keane's ballad "Somewhere Only We Know" for the British department store John Lewis's new Christmas film The Bear Who Had Never Seen Christmas. Set to a wonderfully sweet classic Walt Disney animation-style teaser, Allen's version has got Christmas written all over it, even though of course the song has never been seasonal in any way. It's predicted that the song will enter at number 2 on the British singles charts on Sunday, and why shouldn't it? It's a perfect contender for this year's Christmas number 1 even though it's still early in the race. Beautiful stuff! 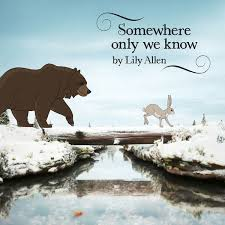