The Captain & Me - Linda Thompson

Now here's a strange one! The Captain & Me (named after The Doobie Brothers' 1975 album) is an Oslo band formerly unknown to me, apparently playing something they've dubbed "Balkan country", based around the talents of two multiinstrumentalists, Morten Krane and Even Vaa. They have released three albums, and in January 2014 will release their fourth, entitled Peter Gabriel. The first single is called "Linda Thompson" so I wouldn't be surprised if the entire album is filled with songs named after famous singer/songwriters such as folk heroine Linda Thompson and world music superstar Peter Gabriel. However, "Linda Thompson" is nowhere near anything you can call Balkan country, it's rather a big and bold synth-pop song with added Zulu-style singing. Maybe there are songs on the forthcoming album called "Miriam Makeba" and "Hugh Masekela" too? I don't know, but what I do know is that "Linda Thompson" is a fantastic song. I'm in love! 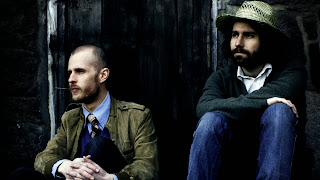