Ylvis & The Roots - The Fox

A few weeks ago, Elvis Costello released his collaborative album with American hip-hop band The Roots, Wise Up Ghost. As many people are aware, The Roots also happens to be Jimmy Fallon's house band on his TV show, and two days ago Fallon switched Elvis with Ylvis, as the Norwegian comedy duo played their first ever live version of "The Fox" backed by the wonderful The Roots. A truly crazy performance as the duo with Fallon along for the ride replicated the video that has become such a YouTube phenomenon. 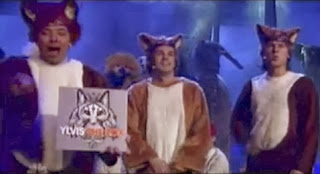