"The Fox", at the time of writing this at 148 million YouTube viewings, has turned Norwegian comedy act Ylvis into international superstars, surprisingly for everyone, and probably most of all, for the boys themselves, Bård and Vegard Ylvisåker. Now, to counteract the success which have gained them access to US television shows like The Ellen DeGeneres Show and Late Night With Jimmy Fallon, they have made a new video and song called "Massachusetts", ending in a very non-PC sequence where they basically say it's really OK to be gay and kiss other men - and more. I don't think that's really what America expects of these two good-looking Norwegians, so let's see if it somehow backfires on them. If so, I'm pretty sure that's intentional. For good measure, the boys have enlisted their sidekick Calle Hellevang-Larsen. And let me also add, this is nowhere near as good a song as "The Fox" actually is, but it's great fun. The best comedy act since Flight Of The Conchords? Hell yeah! 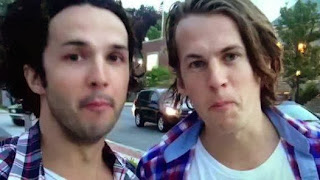