Eagles - Life In The Fast Lane

Eagles' 1976 album Hotel California is one of the best-selling albums of all time, then again, it is a perfect album, so why shouldn't it be? Only nine tracks long, it's perfectly executed, and in many ways a surprising album in light of Eagles' past as a country rock outfit known for hits like "Tequila Sunrise" and "Lyin' Eyes". "Life In The Fast Lane", co-written by Joe Walsh, Don Henley and Glenn Frey is the rocker on the album, held together by Walsh's and Don Felder's guitars that are practically singing in unison, and Don Henley's rusty voice telling the story of a couple living high and fast. It was the third single from Hotel California, after "New Kid In Town" and the title track, classics both as well. 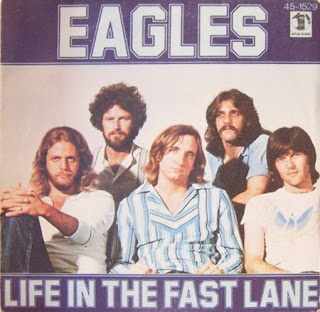