Jimmy Webb's timeless and epic composition "MacArthur Park" must be one of the most unlikely hit singles ever, as wonderful as it still is. But a more than seven minute long love poem set to four different movements of music should not be an easy sell. It was first rejected by The Association, and so the Irish actor Richard Harris recorded it, sending it to number 2 on the Billboard Top 100 in the US and to number 4 on the British singles chart in 1968. In Australia it went all the way to the top. Of numerous cover versions throughout the years, Donna Summer's is probably the most interesting. Aided by producer Giorgio Moroder it was turned into an 18 minute long "disco suite" of songs in 1978.

Jimmy Webb is a fine singer on his own, although he's most famous for his actual songs, sung by some of pop music's greatest voices such as Glen Campbell and Linda Ronstadt to name a few. For his last two albums, including the brand new Still Within The Sound Of My Voice, he's been revisiting old songs, bringing in a number of amazing guests. When Brian Wilson lends a hand, or more precisely his incredible harmony vocals, at a new version of "MacArthur Park", magic does indeed ensue. This is such a beautiful performance. 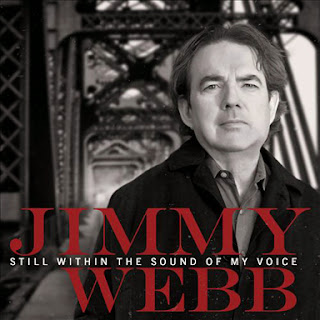