November 18 sees the release of Robbie Williams' second swing album, Swings Both Ways. Featuring duet partners like Lily Allen and Michael Bublé, it sounds like an exciting prospect, and judging from the brand new single "Go Gentle" he's got something very good up his sleeve this time. He's reunited with the songwriter Guy Chambers who helped Williams to his biggest successes and best songs, and on "Go Gentle" the pair (along with co-writer Chris Heath) has created a fantastic pop song, a melancholic masterpiece along the lines of the 2000 single "The Road To Mandalay", which happens to be my all-time favourite Robbie Williams song. To dub this song as "swing" is quite a stretch though, but I really don't care. This one's a keeper! 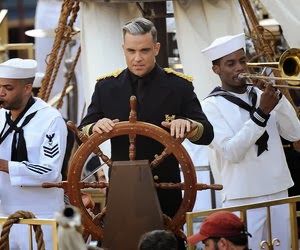