Vampire Weekend vs. Queens Of The Stone Age vs. Robin Thicke - Blurred Lines

"Blurred Lines", the monster hit by Robin Thicke with friends T.I. and Pharrell Williams, is probably my favourite single of 2013. It was everywhere this summer, and it still sounds fantastic. It's a hit with some staying power, to put it that way. As so many hits it has already been covered by lots of people, and a few of these have been more interesting than others. Both New York indie darlings Vampire Weekend and stoner heroes Queens Of The Stone Age have performed versions on BBC Radio for Radio 1's Live Lounge, as well as the man himself, Robin Thicke. All these versions are somehow lacking in quality, even Thicke's own take, here without his famous friends, and I think Vampire Weekend succeeds best. Not one of them can match the strutting original though, but again, they can be called interesting. Have a peek and a listen and make up your own mind.

Queens Of The Stone Age version 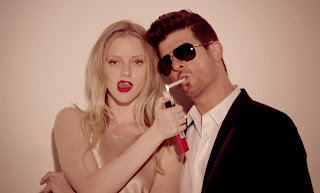