I'm still utterly fascinated by Scottish synth-pop trio Chvrches and their debut album The Bones Of What You Believe. It's a melodic tour de force with singer Lauren Mayberry's mesmerizing voice in front of the grand proceedings. The music is pretty pompous and big-sounding, and even in the quieter moments of their songs, something huge is looming, threatening to burst out of the loudspeakers and envelop the listener. "Recover" was the first single from the album, released back in March, and the performance you'll see here is from a showcase in Austin, Texas. Great stuff, and to quote Human League, an obvious inspiration, "the things that dreams are made of". 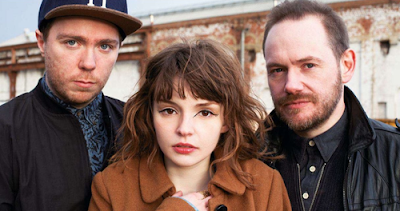