VCMG is short for Vince Clarke Martin Gore, and by that you should know that we are talking about two of the most important songwriters in the world of synth-pop. Vince Clarke was the songwriter on the first Depeche Mode album Speak & Spell (1981), who shortly after its release decided he wanted to something else and formed Yazoo with singer Alison Moyet, leaving the other Depeche Mode members high and dry. Did they give up? Not at all. Martin Gore rose to the challenge and became as good a songwriter as Clarke - or maybe even better, depending on your tastes in music really. Where Clarke is very much pop-oriented (he went on to form another duo, Erasure), Gore is a far moodier and atmospherically oriented type of songwriter. For the VCMG project they found back together after 30 years of not working together, both of them straying from their chosen paths and creating a darker kind of club music than any of them has made before. Spock was their first EP, released in late 2011 prior to the 2012 album Ssss, and it's a great track, almost six minutes of instrumental synthesized bliss. 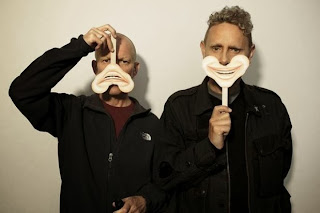