German musician Blixa Bargeld of Einstürzende Neubeuten and Bad Seeds fame and Italian composer and musician Teho Teardo first worked together on the soundtrack to the film Una vita tranquilla (A Quiet Life) in 2010. This summer they released the collaborative album Still Smiling, a fascinating and adventurous collection of 13 songs, of which one is "A Quiet Life" which I guess is similar to the title song from the movie. Blixa sings both in English, German and Italian on the album that reminds me quite a lot of the works of Tuxedomoon and the solo records of Blaine L. Reininger, and former Virgin Prunes singer Gavin Friday. It's also possible to hear echoes of Leonard Cohen on what is a fabulous album, strange and multifaceted, art as much as it's music. 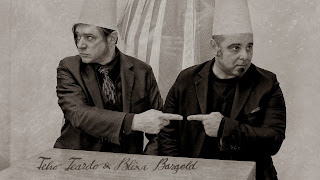