Elvis Costello & The Roots' collaborative album Wise Up Ghost is among this autumn's most original and quirky releases, an adventerous album where two astounding musical entities meet and thrive in each other's company. My favourite song on the album is called "Cinco Minutos Con Vos" (Five minutes with you), where they have enlisted the vocal help of La Marisoul, lead singer of the Mexican-American band La Santa Cecilia. It's an eerie-sounding, very rhythmic song, an urban nightmare with a great groove, sung in both Spanish and English where La Marisoul's vocals perfectly match those of Costello. Chilling and very, very good. 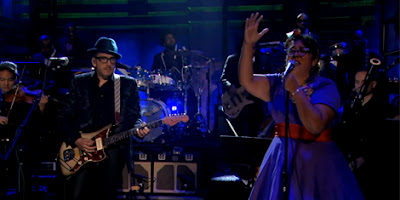