David Bowie surprised the world with his March comeback album The Next Day, the first sign of vital life from the living legend in ten years. On November 4th it will be released as a 3 disc deluxe edition featuring an additional CD and DVD, spearheaded by this wonderful remix of the album track "Love Is Lost". Remixed by James Murphy of LCD Soundsystem fame, apparently inspired by minimalist composer Steve Reich, it's a ten minute plus übercool mix of a song that's already pretty cool in the first place. 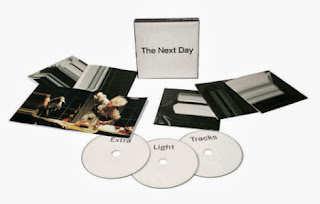