Árstíðir is an Icelandic group dealing in what their Wikipedia article dubs "indie-folk (...) with classical, progressive rock and minimalist elements" that has released two albums to date. "Heyr himna smiður" is a bit left of center though, as it's an old hymn written by Icelandic chieftain and poet Kolbeinn Tumason in the year 1208. The story about Árstíðir's a capella version is that they were touring Europe and in the German town Wuppertal were to perform in an old train station with perfect acoustics and sang the old hymn on the spot. Not surprisingly, as the performance was filmed, Árstíðir has become somewhat of a YouTube phenomenon with more than 800 000 viewings of "Heyr himna smiður" to date. It's really beautiful, so no surprise there. 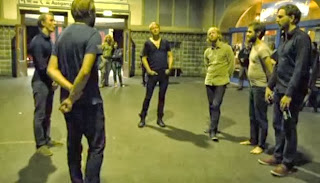