Yesterday I watched American rock band Parquet Courts at Øyafestivalen in Oslo, a great performance from a band I had never heard of. Parquet Courts sounds like a blend of great New York bands like Television, Ramones, Velvet Underground and Talking Heads, somewhat similar to what The Strokes did on their debut album as well, channeling all these great influences into something new and cool. "Stoned And Starving" is a song from their recently released debut album Light Up Gold, the longest track on it by far at more than five minutes. The live version you'll find here is longer though, at more than seven fabulous energetic minutes of classic rock'n'roll. They closed their set yesterday with this one, at least leaving me wanting for more. Parquet Courts? Hell yeah! 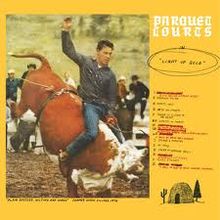