After two albums with his band The Teardrop Explodes, singer/songwriter Julian Cope set out on an adventurous solo career that basically has taken him to the outer reaches of the cosmos, mindwise and at times also musically. Sometimes he's been pretty accessible, sometimes definitely not. "World Shut Your Mouth" falls into the former category, a brilliant guitar pop song with a chorus to die for. It's the lead single from his 1987 album Saint Julian, and he had already used the title for his first solo album in 1984. 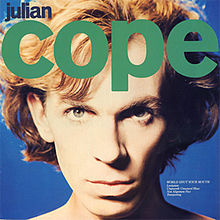