One of the great, great, GREAT albums of the 80's, Prefab Sprout's 1985 release Steve McQueen, consists of 11 songs, most of which are absolutely perfect pop compositions, courtesy of genius singer/songwriter Paddy McAloon. One of the greatest songwriters ever to grace pop music with his presence, this record is regarded by many as his masterpiece, and I am not one to disagree. I remember the wonder which I met this album with, a certain confusion as to how many different shapes a pop song could actually take. McAloon's songwriting may be inspired by many, Marvin Gaye, Donald Fagen/Walter Becker, Jimmy Webb to name a few, but his style is all his own. "Bonny" is song number two off Steve McQueen, and one of my favourite songs on an album that is pretty much perfect. Below you'll find both the studio version (the superior version, that is, expertly produced by Thomas Dolby) and a live version from a show in Munich in 1985. The live clip is very interesting to watch, showing as it does the band in its youth, a 28 year old Paddy in front. 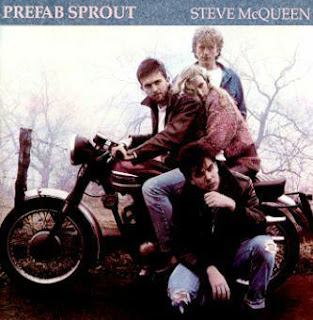