LA sister trio Haim (Adele, Este and Danielle, with the added talent of male drummer Dash Hutton) will be releasing their debut album Days Are Gone on September 27th. This summer they have toured the European festival circuit, playing at the Øya festival in my hometown Oslo which I sadly missed, and at the famed British Glastonbury festival, among other places. Reputedly they have been great, charming audiences along the way with their easy-to-like pop songs that reside in a place inhabited by Fleetwood Mac, Bangles and other California bands with a breezy sheen to their music. Here's the Glastonbury show in full, including their raucous cover of the Peter Green-era Fleetwood Mac classic "Oh Well". It has to be said that the monitors may not be working wonders as their voices (Adele's in particular) are not really that convincing, but based on tracks like "Forever",  "Falling" and the current T. Rex-inspired "The Wire" - surely one of this year's best songs - as well as the other songs performed here, Haim's forthcoming album is something to look forward to. These girls can play, they write brillian songs, and they really ARE that charming. 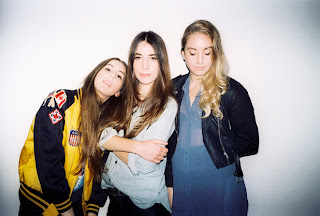