The Doors - Light My Fire

As good as The Doors' "Light My Fire" is, it would be a lot less without Ray Manzarek's fantastic organ intro and subsequent solo. Manzarek sadly died earlier this year, and when hearing a song like this it's easy to take the loss of him a lot more personal than necessary. Having said that, there's not much at fault with Robby Krieger's guitar playing either. And although the song is credited to the whole group it's largely Krieger's composition. The original version from the band's eponymous 1967 debut album was just over seven minutes long, and there were released both a radio and a single edit (both shorter of course). But below you'll find an astonishing ten minute live version from 1968 that mops the floor with these. What. A. Song. 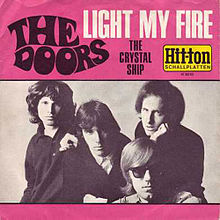