It's a good year for British club music, with excellent debut albums by Rudimental and Disclosure already, and last week, the duo AlunaGeorge with the album Body Music. "You Know You Like It" is actually two years old now, but a new video has been made as it was included on the album and also re-released as a double A-side single along with the track "Bad Idea". AlunaGeorge is made up of singer/songwriter Aluna Frances and producer/musician George Reid, and yes, their album is quite good. 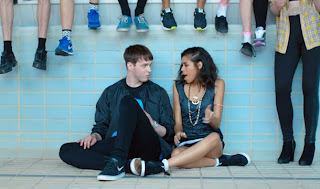