Jane's Addiction's 1988 album Nothing's Shocking was a benchmark album, in many ways paving the way for the commercial success of bands like Soundgarden, Nirvana and Pearl Jam a few years later. Frontman Perry Farrell's enigmatic looks and characteristic voice differs a lot from most metal singers, and the band's music was loud and extremely cool, bridging gaps between music fans like me, who was by no means a big fan of hard rock, but could appreciate the energy and the melodiousness. "Mountain Song" is a prime example. 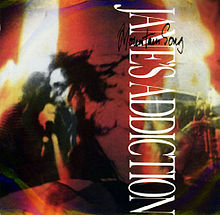