Fantastic Something - If She Doesn't Smile (It'll Rain)

The Greek duo Fantastic Something is famous (well, known may be a better word) for one song, the gorgeous 1983 single "If She Doesn't Smile (It'll Rain), released on the eclectic indie label Cherry Red Records. Constantis and Alexandros Veis are brothers, and released a self-titled album in 1985 on the Blanco y Negro label, also home to Everything But The Girl and The Monochrome Set who were both Cherry Red acts, and The Jesus And Mary Chain. But however good that record was, there were no songs on it to match "If She Doesn's Smile", an absolutely perfect summer single, with a characteristically pastoral British sound. One of my all-time favourite songs. 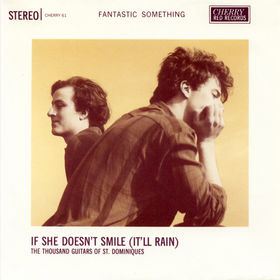