"Causing A Commotion", one of four songs Madonna recorded specifically for the soundtrack to her 1987 film Who's That Girl, is largely forgotten, a song she seems to have distanced herself from. Why I don't know. Although not an out and out classic, it's a cute dance song that very much shows what she was doing at that particular time of her career. It sounds like it could have been an outtake from the 1986 album True Blue and wouldn't have made it an inferior album if it was on it. As it is, it's still available on the Who's That Girl soundtrack, but has never appeared on a Madonna compilation. The video in the link below is fan-made as there was never made an official video for "Causing A Commotion". A shame really. 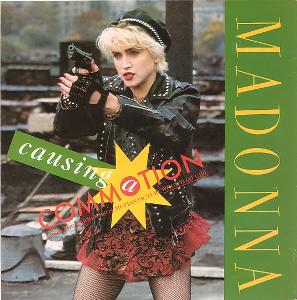