Skee-Lo - Top Of The Stairs

This is a very typical 90's California rap single. Skee-Lo's "Top Of The Stairs" is quite similar to pop/rap hits by acts such as Coolio, Warren G and Will Smith, i.e. laidback, melodic and in most respects pretty cool. Skee-Lo will basically be remembered for his hit "I Wish" from 1995, but although that's a great song, my money is on this. "Top Of The Stairs" was featured in the movie Money Train featuring Woody Harrelson and Wesley Snipes, also from 1995. Both songs are from the same album, also called I Wish. Skee-Lo also released an album in 2000 called "I Can't Stop", and in 2012 he released the album Fresh Ideas. Unfortunately, I don't think that many were interested in those. Having said that, I'll love "Top Of The Stairs" til I die, it's an awesome song!
Watch and listen 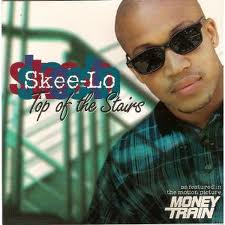