Last night American country-rock trio Dixie Chicks played a great show in Oslo which, naturally, ended with "Not Ready To Make Nice" before they did a rousing version of Bob Dylan's "Mississippi" for the final encore. "Not Ready To Make Nice" is singer Natalie Maines' reaction to the controversy following her comment about the American president from a stage in London in 2003 prior to the Iraqi invasion, stating they were ashamed that he was a fellow Texan. Receiving death threats a-plenty, being banned from radio stations, and having their records and merchandise burned and bulldozed by angry Republicans, Maines and her fellow Dixie Chicks, Emily Robison and Martie Maguire, found themselves totally ostracized from a large part of their audience. Three years later, they reemerged with a new album, Taking The Long Way (their last to date), that was spearheaded by "Not Ready To Make Nice" which has more or less become their signature song. "Forgive? Sounds good. Forget? I'm not sure I could. They say time heals everything, but I'm still waiting", sings Maines, still "mad as hell". It's a marvelous and totally inspirational song about standing up for the things you believe in, not caring what others think. It's about finding an inner strength when you need it the most. A modern masterpiece and one of the highlights of yesterday's concert. 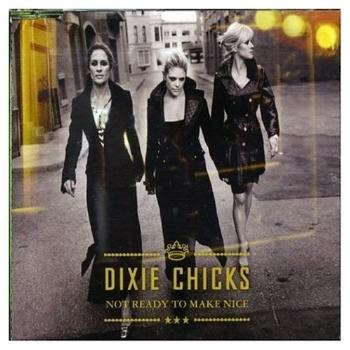