Memphis band Human Radio didn't want their record label Columbia to push the song "Me & Elvis", fearing they would be considered a novelty act. They may have been right, but not necessarily. Columbia Records did go against the band's wishes and released the song as a single, and it was a minor hit in the US in 1990. It was the first track on an otherwise pretty forgettable album, and I think the label did the right thing. Human Radio and Columbia soon parted ways, and the band wasn't heard of again. Having said this, I think "Me & Elvis" is an absolutely brilliant song and not at all a novelty song. It's a perfect rock song about, well you guessed it, an imaginary friendship with the King. A lost classic. 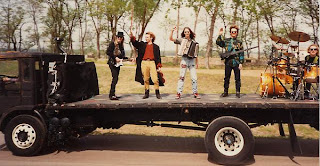