Never underestimate a good singer! Miley Cyrus' Hannah Montana character may have gotten her some ridicule, but she became a big star with the kids, and the girl can sing. In recent years she has showed that she could easily grow out of the teen segment, and with her fabulous rendition of "You're Gonna Make Me Lonesome When You Go" for the four disc Bob Dylan/Amnesty record Chimes Of Freedom last year she once and for all established that she had a lot more to offer than many had thought. Last summer she did her so-called "Backyard Sessions", performing some favourite songs along with her excellent band. A week ago the third song from these sessions were posted on her website www.mileycyrus.com and on YouTube, a fantastic version of Dolly Parton's classic "Jolene". The previous two songs that has been posted are James Shelton's "Lilac Wine" and Melanie's "Look What They've Done To My Song". All three are really good, so I really hope they will find their way to a record, or at least a digital release.

"Look What They've Done To My Song" 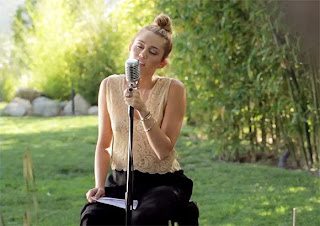