It's hard to do a credible version of "Fairytale Of New York", the 1987 The Pogues/Kirsty MacColl Christmas duet. Nobody really come close to the spite of Pogues singer Shane MacGowan and Kirsty MacColl as they trade lines shouting insults at each other. There has even been a version "translated" into Norwegian sung by Helene Bøksle and Vidar Johnsen that is just awful.

But finally a newly recorded version gives the original its due respect and deference, and it's actually not bad. It's not great, but it's pretty good, OK? Now... Katzenjammer is a Norwegian group of international renown, famous for the number of instruments they play that they also like to switch while on stage. Ben Caplan is a gruff-voiced Canadian singer/songwriter doing the role of Shane, and The Trondheim Soloists is a Norwegian chamber orchestra, also of a certain international repute. At the request of Norwegian streaming company WiMP these people have attempted to do a semi-classical version of "Fairytale Of New York", and it works. The video is a bit problematic as the Katzenjammer girls keep smiling and laughing, despite the song's lyrical content, but at least they seem to have fun and that spirit lives on into the actual recording which, as I said, is pretty good. I will always return to the original, but this is an interesting take on what has become a true Christmas classic. 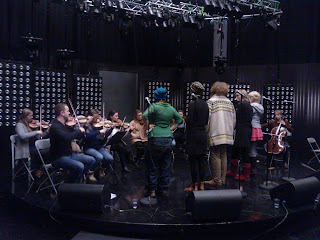