Not for the first time, David Bowie changed musical direction with his 1980 album Scary Monsters (And Super Creeps), a modern sounding album that plugged directly into and ahead of what was going on at the time. Along with artists like Talking Heads and Peter Gabriel, Bowie was at the sonic forefront of popular music, helped in large part by his co-producer Tony Visconti. "Fashion" is one of the most easily accessible songs on the album, but still very unusual, and what really sets it apart is of course Robert Fripp's astounding guitar work. "Fashion" was a hit single different from everything else. 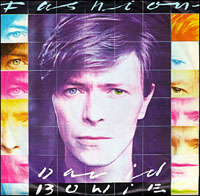