San Francisco-based musician and songwriter Ty Segall is wildly prolific, recording in every possible direction all the time, like a love child belonging to Jack White and Ryan Adams. Among his output in 2012 is the album Hair, credited to Ty Segall & White Fence. White Fence is a pseudonym for the L.A. rocker Tim Presley. I've only heard the song "Scissor People" so far, but that is truly fantastic, an intense, overdriven guitar-fest, semi-psychedelic and impossibly frenzied. It goes on for nearly six minutes, building in intensity for every second. This is the kind of song that can lift entire mountains, it's so loud and energetic. Prior to the album release Segall said the pair wanted to "bring the guitar solo back to rock'n'roll", and boy do they do it! This is the coolest rock song I've heard in ages. Wow!!! 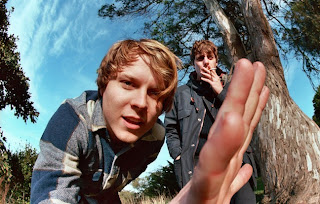