The Seeds - Pushin' Too Hard

American psychedelic garage rock band The Seeds, fronted by the enigmatic Sky Saxon, went from being very "underground" to almost becoming teenyboppers, a much dreaded term, thanks to hit singles such as "Pushin' Too Hard". The song was first released as a single in 1965, and peaked at number 36 on the Billboard Hot 100 when it was re-released the following year. In 1968 the band performed "Pushin' Too Hard" in the television sitcom The Mothers-In-Law, and I guess it's fair to say that more people probably remember The Seeds than The Mothers-In-Law. Or maybe not... Anyway, click on the link below and you can watch the performance in the sitcom. "Pushin' Too Hard" is a great rock song. 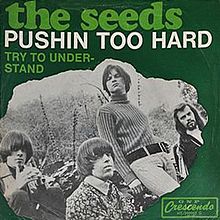