Today is a dark, dreary day for the Norwegian music industry. We have lost two dear friends, legendary music journalist Tor Milde and former record company executive and manager Per Eirik Johansen, who were pronounced dead today, 61 and 54 years old. As if that is not enough, the noted professor and author Jon Bing died as well, at 69. In their honour, I want to play The Divine Comedy's "Absent Friends", the title track for their (well, "his", as it's mostly Neil Hannon and an alias anyway) brilliant 2004 album. This is the song in which Hannon raises his glass to Steve McQueen, Oscar Wilde and others calling "Absent friends, here's to them". I will raise a glass as well tonight. Thanks for the ride, boys! 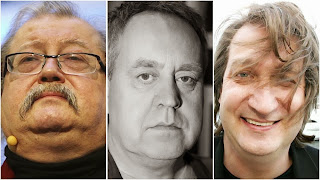