For many years John Hiatt was mainly known for being a great songwriter, having written scores of songs picked up by the likes of Ry Cooder, Bonnie Raitt, Linda Ronstadt, Nick Lowe, Rodney Crowell, Emmylou Harris and many, many more. What fewer people seemed to concern themselves with was Hiatt's own records, but truth be told, the covers of his songs were most times way better than Hiatt's own versions. Then in 1987 he recorded the album Bring The Family, the start of a trilogy that made Hiatt one of the best roots rock artists in the late 80's and early 90's. The band on that particular album was stellar, featuring Nick Lowe, Ry Cooder and Jim Keltner in addition to Hiatt himself. These guys later reunited as Little Village and cut a surprisingly unsatisfactory album. Hiatt was on a run however, and Slow Turning came just a year after Bring The Family and became his biggest success to date, even without that extraordinary band. The guys that played on it were no slouches though, and Slow Turning is a great, great album. "Tennessee Plates" is among its best-known songs, a fierce blues-rock number with Sonny Landreth playing a fantastic slide guitar like it was going out of style. One hell of a song! 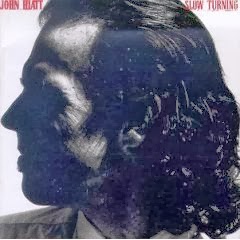