Happy birthday to Michael Stipe who's 54 years old today. As lead singer in R.E.M. he's one of the most influential artists of the late 20th century with a body of work that's at least mildly impressive. The band's 1987 album Document was fabulous, and among it's very best songs was this single, the amazingly titled "It's The End Of The World As We Know It (And I Feel Fine)". It's a song as good as its title suggests too, a stone cold classic. 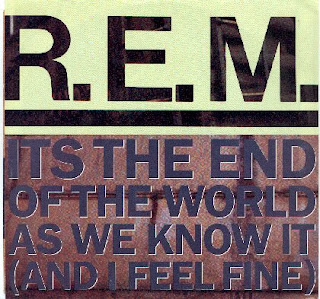