Not only is Beck releasing his first new album in almost six years on February 14th, Morning Phase, described as a companion piece to his lovely 2002 album Sea Change. At the same day Starbucks will release a special Valentine's Day compilation of covers called Sweetheart 14, with new recordings by Vampire Weekend, Phosphorescent, Fiona Apple and others, and of course Beck who is doing this beautiful take on John Lennon's classic "Love". 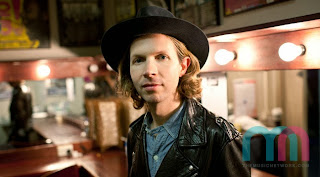