Following her number one cover of Keane's "Somewhere Only We Know" and the "controversial" hit single "Hard Out Here" in which she criticized the objectification of women in today's music business, Lily Allen is back with a new single today, "Air Balloon". This one shouldn't cause too much fuzz, as it's mostly just a sweet, annoyingly catchy pop song about a trip in Lily Allen's air balloon through the clouds, in which she references Kurt Cobain and Elvis Presley. A charming, funny song. 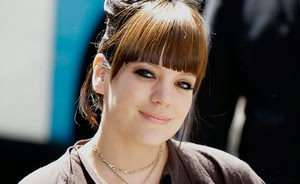