Justin Timberlake - Take Back The Night (now with added video)

What a fantastic song Justin Timberlake's new single is! "Take Back The Night" is the first single off his forthcoming album The 20/20 Experience: 2 of 2, this year's second new album from Timberlake who prior to this hadn't released an album since 2006. If the first of these was danceable, then the new one should be even more so to judge from "Take Back The Night". A blantantly unapologetic go at Michael Jackson/Quincy Jones around the time of Off The Wall, this is a triumph of a dance record from Timberlake and his cohort Timbaland. It simply sounds like the best single not to be released from Off The Wall, a kind of time travel which sounds modern all the same. Yesterday the video was released, and yes, it features dancing. A lot of it. In the streets, on stage and in a club, and it's pretty hard to sit still while watching it. Put on your dancing shoes and try some moves! 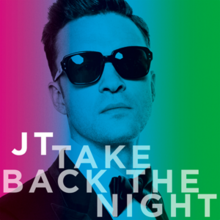