The Supremes - You Keep Me Hangin' On

Not too long ago a Norwegian "journalist" whose name eludes me, wrote that Kim Wilde's version of The Supremes' classic "You Keep Me Hangin' On" was superior to the original. That may be the stupidest thing I've ever heard (or at least close to it), although I actually like Kim Wilde's overblown Stock Aitken Waterman-produced version. Here though, in all its Motown glory, written and produced by Holland-Dozier-Holland, is the original Supremes version from 1966. Knock-out stuff! 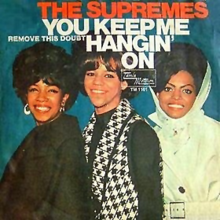