Village People's "Go West" was released in 1979, hot on the heels of gay anthems "Y.M.C.A." and "In The Navy". It was pure and wonderful late 70's disco music, commercial as all hell, and in 1992 Pet Shop Boys made their Hi-NRG version incorporating elements from the Soviet anthem, and also enhancing the basis of the original's chord progression in Pachelbel's Canon, turning it once again into a worldwide smash hit. The animated music video was nominated for a Grammy and is definitely worth watching. Fabulous Pet Shop Boys, you just gotta love them! 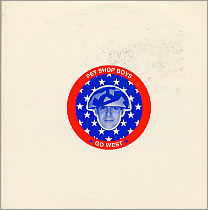