The Special A.K.A. - Nelson Mandela

Happy birthday to Nelson Mandela who turns an astonishing 95 years today. If not exactly alive and kicking, he is after all alive, and according to certain sources his health has improved a bit after the last weeks' serious illness. To celebrate in song, there is of course one hit single that is a cut above the rest, The Special A.K.A.'s 1984 plea for the former ANC leader's release from imprisonment, simply called "Nelson Mandela". With its cry of "Free Nelson Mandela" his name went from obscurity to celebrity almost overnight, and there is no doubt the song had a political impact in the continous work of having Mandela set free, and most importantly, putting an end to the white South African Apartheid regime. It's also a seriously good dance track, as evidenced in the video. Finally, let me add that the song is credited to The Special A.K.A. and not The Specials. The Special A.K.A. was Jerry Dammers' (songwriter and piano player) regrouped version of the former ska band, with two new vocalists, Stan Campbell who sings on this track, and former Bodysnatchers singer Rhoda Dakar. 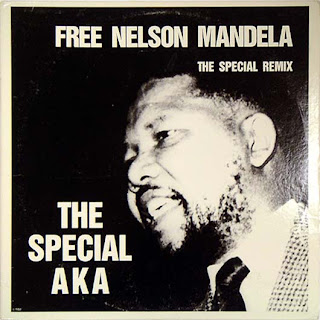